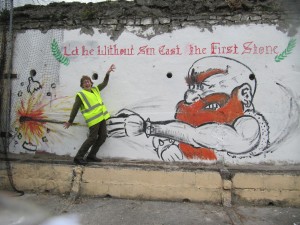 The World Stone Throwing Championship is an ancient Irish tradition. A long, long time ago the Tuatha De Danann, also known as the Fairy Folk had in their possession a very powerful rune called an Cloch Mhór Draíochta. This stone had magical properties. It imbued the holder with the ability to hit any object or person they aimed at. Many enemies of the Fairy Folk perished, felled by this very stone. The fierce Fairy warrior Orda stole the stone from the goddess Danú. In Ordas honour, the Fairy Folk held an annual event to which any person from around the globe was welcome to join. Each warrior chose five stones. Two at a time were pitted against each other, taking turns throwing their carefully chosen stones. Of course, an Cloch Mhór Draíochta was not used in the competition. To avoid the goddess Danú from ever finding the stone again, the Fairy Folk hid the stone somewhere in the Burren, amongst the many other stones there.

Legend has it that Fionn MacCumhail of the Fianna, who created the Giants Causeway in Co. Antrim, is a past holder of the title. There are even suggestions that the Romans, having heard of the championship and terrified by the prospect of meeting these madmen in battle, decided against invading Ireland, instead staying in Britain.

Sadly over the millenia the location of an Cloch Mhór Draíochta was lost. Manys the warrior has lost their lives searching the Burren for the magical stone.

The event, long having been neglected, was brought back to life in 2000 in Corofin, Co. Clare and has been an annual event ever since. Of course, it is no longer a bloody fight to the death as this is frowned upon in modern Ireland (though not completely prohibited), and instead has become a fun day out!

As in ancient times, contestants must choose their own stones from a selection at the event. Choose wisely. Some people believe that an Cloch Mhór Draíochta is among these stones. Find it and all will be yours!

There is a Ladies and a Gents cup to compete for and paticipants must be over 18 years old. The event is being held on Sunday 30th April 2017 and is being held in Campbells Yard, Inchiquin Inn, Corofin, Co Clare at 4pm. Cost of entry is €5 and you will receive 5 stones. The aim is to break a glass bottle (and not an opponents head, as was the custom) with your stones from a distance. Sounds easy? Then give it a try!

Tea and Coffee will be available as well as food
(and perhaps even the odd alcholic beverage!)